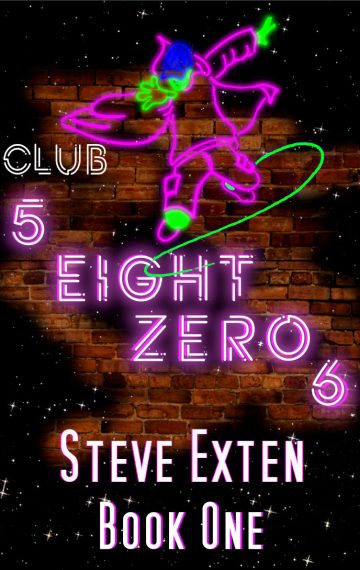 99p Amazon Ebook
£0.99Buy from AmazonBuy from your other favourite bookstores

Girl wants to meet boy in this telepathic Sci-Fi romance.
Lucy Hettler, the college pin up, can have her pick of her many admirers, but chooses JD, the loner geek with a troubled past, instead.

JD is a mixed up twenty-two-year-old. A loner haunted by terrors from the past. Shunned by his peers who don’t understand him. Sitting there, silhouetted against the moons, he cuts a pathetic figure. And now there’s a girl’s knocking on the door to his mind. His mind is mixed up enough as it is, the last thing he wants is her size fives trampling amongst his thoughts. JD’s keeping that door firmly locked and barred.

Lucy is a ‘Straight A’ student and poster-girl of Mech-U. She’s vivacious, sharp, intelligent, but maybe too trusting of her abilities? Because time is running out for Lucy… her degree is teetering on the brink!

“Oh Cris,” she groaned, “I started too late, and spent too much time clubbing. What am I going to do, Cris? I am going to fail, I’ve nothing to show.”

“That’s you all over, isn’t it – last minute Lucy,” Cristi, her roomie scolded.

Lucy nodded, “I know. You’re right, Cris,” she cried, sobbing into a tissue. “I have the Homid telepathy gene, he does too, and linking across the mindPlain should be easy. But he’s ignoring me, he just sits there, staring into the night sky, oblivious to all about him!” she wailed.

So what happened to JD? What are those terrors? Why does he stare into the night sky, what is out there? And why did the Prof add, the now abandoned, ‘Club5 Eight Zero 6’ to Lucy’s study list in the Telepathy Module? What’s that all about?

Club 5 Eight Zero 6 picks up the AtomSpheres story ten years after Rogue Orbit and features some key players from that story. It’s a girl meets boy story centring around Lucy, a straight-A student with the Homid telepathic gene and her bid to make contact with Jez (JD) who also has the Homid telepathic gene. But even though Lucy is the poster girl of Mech-U, the girl that everyone wants to date, Jez has blocked his mind to her telepathic advances. Jez is a troubled soul. He was in the StarLink when disaster struck and having Lucy’s size fives, trampling on his memories, is the last thing he wants right now.

Reviewed in the United Kingdom on 6 November 2020

The way story grows allows you to grow with the characters.
the written concept of telepathy is a genius touch.
steve foster
5.0 out of 5 stars
enjoyable

Reviewed in the United Kingdom on 5 October 2020

I really did enjoyed this book, hope there’s more.

Nov 21, 2020
What is out there?
Great read,opens up lots of the theories,and makes you want to know more,,much more.looking forward to the next episodes,in the series.